Ian Botham may be a good cricketer. But a trade negotiator? I do not think so

By Vijay Prashad*
On March 16, 2022, the President of Kazakhstan, Kassym-Jomart Tokayev delivered his State of the Nation address in Nur-Sultan. Much of Tokayev’s speech focused on the political reforms in Kazakhstan he had accomplished or planned to advance, after he had promised them as reparations for January’s political unrest and protests against the Kazakh government.
He also addressed the impact of the Russian-Ukrainian war on Kazakhstan during his speech and highlighted food price spikes and currency volatility as some of the worrying economic consequences the country is facing as a result of this conflict.
Tokayev’s speech was delivered four days before the Nauryz holiday, which falls on March 20 and is a New Year holiday celebrated by people in the belt that stretches from Kurdish lands to Kyrgyz lands.
Households in Kazakhstan were gearing up for the celebration, though inflation in food prices – which preceded Russia’s intervention in Ukraine and the resulting Western sanctions imposed on the Kremlin – had already darkened the mood of the festivities. in the country ; in mid-March, the National Bank of Kazakhstan reported that the prices of food products such as baked goods, cereals, vegetables and dairy products – important components of a Nauryz meal – had risen by 10% .
“Kazakhstan is facing unprecedented financial and economic difficulties in our modern history due to the escalating geopolitical situation,” President Tokayev said. The “tough sanctions” imposed on Russia by the West are already having an impact on the global economy, he said, adding: “Uncertainty and turbulence in global markets are increasing, and production chains and trade are collapsing”.
Rising food prices and financial turmoil – the result of both Western sanctions against Russia and the integration of national economies – have raised alarm bells and appear to have heightened the urgency of resolving these issues in countries. from Central Asia such as Kazakhstan.

Tokayev spent part of his state of the nation address talking about inflation in energy and food prices. He spoke of the need for the government to oversee the production of agricultural equipment, fertilizers, fuel and seed stocks. Tokayev’s remarks are not new.
Other Central Asian heads of government have also expressed the need for their governments to step into the arena of food production, as the COVID-19 lockdown and the ongoing Russian war in Ukraine have demonstrated the enormous vulnerabilities of the global food chain, exacerbated by the privatization of food production.
Food prices in the Eurasian Economic Union (EAEU) – comprising Armenia, Belarus, Kazakhstan, the Kyrgyz Republic and Russia – continue to rise, due to the Russian-Ukrainian conflict, exceeding world prices foodstuffs. While these countries are “heavily dependent on imports from Russia”, they now face a temporary ban on wheat and sugar exports from Russia due to the conflict.
On March 11, 2022, the United Nations World Food Program (WFP) published a report on the “food security implications of the Ukrainian conflict”. The conflict, says the WFP, “comes at a time of unprecedented humanitarian needs, as a ring of fire revolves around the earth with climate shocks, conflict, COVID-19 and rising costs, bringing millions of people from starvation”.
Russia and Ukraine produce and “supply 30% of wheat and 20% of maize to world markets”, according to the WFP report, and these two countries also account for three-quarters of the world’s sunflower supply and a third of world barley. to supply. Meanwhile, Black Sea ports have been largely idle since Russia blocked all exports from these ports due to the ongoing war.
This lead to “[a]n estimate of 13.5 million tons of wheat and 16 million tons of maize” being “frozen in these two countries” because these cereals cannot be transported out of the region. The United Nations Food and Agriculture Organization’s food price index hit “a new all-time high in February”.
The President of the International Fund for Agricultural Development, Gilbert F. Houngbo, has warned that the continuation of the Russian-Ukrainian war “will be catastrophic for the whole world, especially for people who are already struggling to feed their families”, according to a report of ONU. “This area of ​​the Black Sea plays a major role in the global food system, exporting at least 12% of food calories traded globally,” Houngbo said.
One of the big problems with globalization is that vulnerabilities in one part of the world have an almost immediate impact on other parts of the world. In 2010, droughts in China, Russia and Ukraine drove up the price of food grains, which then ‘intensified’ the Arab Spring.

The ideas of ‘food security’, a phrase used by Tokayev in his State of the Nation address, have existed since the first World Food Conference in 1974; At this meeting in Rome, United Nations member states reflected on the famine situation in Bangladesh and called for measures to ensure international food price stability and hold governments accountable for ending hunger in their respective countries.

The Covid-19 lockdown and the Russian war in Ukraine have demonstrated huge vulnerabilities in the global food chain, exacerbated by privatization

The current situation of food inflation and food instability in the global commodity chain has refocused attention on the need to ensure increased national and regional production rather than relying on distant producers and unstable international markets.

In October 2021, the Central Asia Bureau for Analytical Reporting (CABAR) organized an expert meeting on the problem of food production in the region. Nurlan Atakanov of the Kyrgyz Republic’s Food Security and Nutrition Program said local farmers were unable to grow wheat of sufficient quality “due to limited cultivation areas and climatic conditions”.
His country imports a third of its wheat from neighboring Kazakhstan. Daulet Assylbekov, an expert from Kazakhstan who is a senior analyst at BLM Group, meanwhile said that wheat harvests in Kazakhstan have fallen by 30% due to pandemic-related restrictions. This has had an impact on food prices in Central Asia. 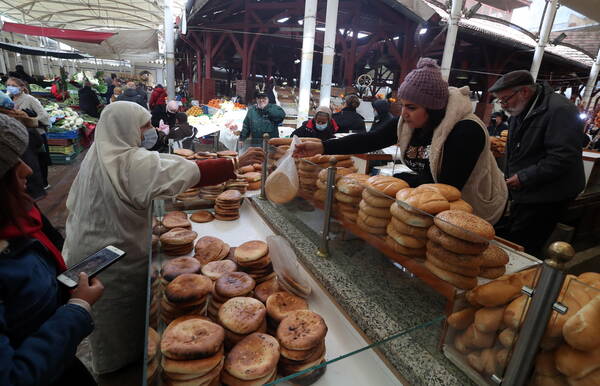 Wheat yield in Tajikistan is currently 27-3000 kilograms per hectare, well below the yield of Russia’s Rostov region of 67-7000 kilograms per hectare, according to CABAR.
Economist Khojimahmad Umarov told the CABAR meeting that if Tajikistan had access to mineral and organic fertilizers and improved its agricultural knowledge, yields could reach 90 hundred kilograms per hectare. But agriculture was neglected and countries like Tajikistan were encouraged by the International Monetary Fund (IMF) to import food and export cotton and aluminum.
Uzbekistan’s Ministry of Agriculture has now urged its farmers to increase wheat production from 6.6 million tonnes of grain in 2021 to 7.6 million tonnes this year as well as improve national production of sugar to meet the country’s domestic demand despite the temporary ban on exports. by Russia; Uzbekistan has traditionally relied on Russian wheat and Brazilian sugar.
Meanwhile, like Uzbekistan, the government of the Kyrgyz Republic imports sugar, vegetable oil and wheat from other countries every year, and the current war between Russia and Ukraine could lead to a grim situation. in terms of food security and the fight against food price inflation in the Kyrgyz Republic.
At the start of the war in Ukraine, the poorest households in the Kyrgyz Republic – the second poorest country in Central Asia after Tajikistan – spent 65% of their income on food; current inflation will be catastrophic for them. The Cabinet of Ministers of the Kyrgyz Republic, led by Akylbek Japarov, held an emergency meeting with food processing companies in Bishkek to discuss how to increase food production and prevent rising levels of famine in the country.
At the Diplomatic Forum in Antalya, the leaders of Central Asian countries called not only for the cessation of hostilities in Ukraine, but also for the regional integration of their countries with South Asia. Uzbek Foreign Minister Abdulaziz Kamilov said his country was keen to act as a bridge to unite these regions. The general verdict among Central Asian countries is that greater self-sufficiency is important – especially in food production – but also that regionalism must be emphasized.

One of the problems with regional integration in Central Asia is that there are very few options for transporting goods from one country to another — Kazakh wheat travels by train to the Kyrgyz Republic, then is transferred to trucks to cross difficult mountain roads. Regionalism is not just a concept. It was to be achieved through the creation of food processing plants, better transport systems and easier cross-border trade rules.
The COVID-19 pandemic and Russia’s war on Ukraine have alerted Central Asian governments to pay much more attention to the issue of food security. What the IMF says about liberalizing food chains makes little sense these days.
Concerns about famine and bread riots resulting from the Russian-Ukrainian conflict and the ongoing pandemic are a good wake-up call for countries to focus on finding more durable local and regional solutions and resolving the issues that have been part of the economic, social, and political fabric of Central Asia for decades.
—
* Indian historian, publisher and journalist; is a writer and chief correspondent for “Globetrotter”. He is editor-in-chief of LeftWord Books, director of Tricontinental: Institute for Social Research, and nonresident senior fellow at the Chongyang Institute of Financial Studies, Renmin University of China. This article was produced by Globetrotter

Forward live news and Premier League updates as Harry Kane says he will stay at Spurs, Kylian Mbappe at the latest

What relegation would mean for Everton – The Athletic